The day wasn't looking very good initially...in fact it was raining in Vancouver when we left. But the webcam at Woodside was showing sun, and the subsequent days this coming week weren't looking too hot, so we headed out, me to fly XC (hopefully), and Alex to do a couple of tandems.

Indeed, as we headed east it got brighter and brighter, and by the time we got to Abbotsford it was sunny with huge industrial cu's all over the place. It looked very nice especially with light winds all around. Up on Woodside launch it was quiet cycles-wise, but people were staying up no problems despite the shade.

I didn't launch right away, and in the meantime both Martins and Thomm headed over the back to Agassiz Mountain. Meanwhile over at Bridal Alan was reporting east wind. Reports of strong outflow winds at Harrison Lake (Martin H. flew back to Woodside, Thomm landed at Harrison Hot springs) made me decide to head west instead. 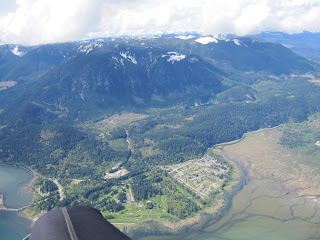 Martin H. and Justin were ahead of me and reporting leeside conditions; all the lift was away from the mountains and over the valley. With this in mind I topped up to 1500m over the north cliffs and headed over to Sasquatch, heading for the north side (arriving at 900m). But this didn't really work as I didn't find anything on the north approach and had to settle for the leeside of the south side of Sasquatch where Martin H. and Justin were grovelling.

I passed Martin H. who was heading back to Woodside (for a 25 km-ish OR) and then it was just Justin and me. While Justin was nice and comfortably high, I was grovelling at 300m over the gravel pit at the west end of Lake Errock when I finally found something that got me out of there and into the game again. From then on it was the occasional cloudsuck, but mostly flatland flying out front over the valley.

At Dewdney I got low again, and rather than skipping over the back to Sylvester Valley, I had to doodle my way around the entire Dewdney mountain the long way to get into that valley. My original plan was to head to Mt. St. Benedict, and then try to return to Woodside, but when I started heading north I saw a lot of shade (the entire mountain range was shady), lots of sink, and you start losing convenient landing zones. So I went about 1/2 way to M.S.B and then turned around to head back to Dewdney and the sun.

Meanwhile Justin had continued west and landed in Mission somewhere, and I ran into Norm who was just coming up to Dewdney from the east when I came back to it from the north. I radioed to him that we should go to Mission too and off we went.

It was very buoyant and lifty all over the place, and we easily reached downtown Mission on glide. However, the airspace surrounding Mission was extremely busy with GA pilots and small planes flying all over the place. You had to continually be swivelling your head to keep an eye on all of them, and I'm sure I missed some, even though I could hear them nearby.

In Mission I saw a nice baseball diamond to land at, but as I got closer I could see guard towers and a large fence surrounding the entire area so I opted to give that LZ a miss :) (Good thing as the CYR surrounding that prison is 1500'). Instead I headed for a school with a nice track and field oval to land at, and Norm followed me. Unknown to me, Justin had landed at this exact field a short time ago and was still there. Also unknown to me, Justin lived about 4 blocks away!

Anyways, I was about to land with Norm when I found a nice thermal ove 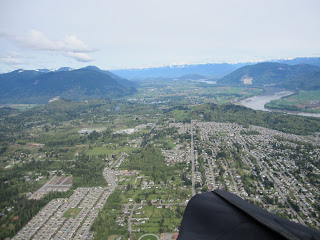 r the subdivision and climbed out again (photo #2 of me looking back east, with Dewdney in the distance). I could see downtown Vancouver at this point and wondered how far I could get. It looked like I could glide almost to Maple Ridge at this point (it was still lightly outflow conditions), but with all the weekend air traffic and the fact they probably weren't seeing me, plus the fact Norm was already landed with a ride waiting, made me decide to land there instead. So I turned around and spiraled and big-eared my way to the ground. 46 km (with my detour towards M.S.B) and Tracklog.

Justin and Norm were waiting for me and Justin gave us a ride back to Woodside. Thanks Justin! It was a great day flying, and I wonder just far west I could have flown if the air traffic had been a bit lighter... When you are in the mountains you don't have to worry about it so much, but over Mission you leave the mountains and are flatland flying and are encroaching on their turf (so to speak). But it was definitely tempting!