With the forest fire still burning south of us, with a 5 nautical mile restriction zone around it, we had to fly north instead. This wasn't an ideal direction given the wind direction for the day (NW) but we decided to give it the ol' college try. On a side note, on the news today the fire was said to be caused by arson. When speculated on who started it, one local said that all he knew was that the fire started up shortly after "all them hang gliders flew past yesterday". So once again we are equated with less-than-civil behavior (unless of course somebody was smoking while paragliding :).

Task was to fly north just past Point of the Mountain, tag a TP there (just south of Olympus), and then goal at the north side of POTM. Total distance about 53 km. 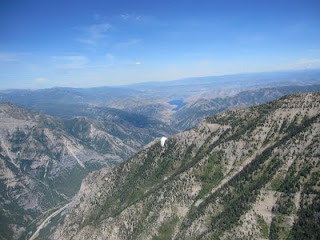 I launched and was able to climb right out to 12,000' up to Cascade Mountain behind launch, which gave me a great view of the Wasatch range and Deer Creek State Park (the lake in the distance in photo 1). Since we had to be within 3 km of launch after 2:30pm, and we were ultimately going to head north, I decided to wait for the start upwind, on the other side of Provo canyon, and then dash downwind to tag it (as the 3 km mark was right in the middle of the canyon), rather than have to slog upwind at 2:30pm when I might be lower.

This worked great as I crossed to the other side of Provo canyon out front and was able to find a thermal over there to keep me up. I was actually 4 km away from goal, but the thermal was drifting me back to the 3 km mark, and I had 10 minutes to go until the start, so I let myself drift back in the thermal until 2:30pm came. I was still a bit upwind and outside the start, so I had to turn downwind for about 10 seconds or so, but I was able to tag the start along with the first 10 gliders or so coming upwind towards me, and was among the first to lead back out across the canyon.

Now this canyon is broad enough and has some LZ options in it that crossing it deep is not as bad as some of the other canyons we've had to cross. And the mountain we were headed for (Mt. Timpanagos) was directly into the wind, so I reasoned that if I could only get there, I'd be able to ridge soar up the face of it and not sink out. And there were plenty of places to land on the plateau below Timpanagos if you had to glide out (albeit with a mondo hike out). So I went for it and dove onto the face of the mountain. Everyone was following and doing the same thing and we all just dolphin flew our way back up to 12,000', not turning once, and flying the entire face this way. It was rather fun with all the gliders around me, all doing the same thing and the vario beeping reassuringly. I would have loved to have taken photos of this part of the flight, but I was close-enough in to the mountain face, and surrounded by gliders that weren't always behaving themselves, that I didn't want to risk letting go of the brakes to grab my camera.

At the other end of Timpanagos was another canyon. American Fork canyon is not as friendly as Provo canyon, even though it's a shorter glide across, since it's steep-sided, with no LZ's at the bottom, rocky cliffs the whole way to the road at the bottom, and very narrow so the wind just howls through there. This canyon is why the phrase "canyon suck" was invented. When I saw this canyon I knew it was trouble, and stayed on Timpanago to tank up for the crossing over. Problem is, Timpanago is set so far back that when you tank up, you end up so far back that you can't really cross straight over the canyon without getting sucked into it, with no place to land. You have to head out into the flats essentially in order to curve way around it and avoid the canyon suck (if such a thing is possible with this particular canyon).

I headed out to the flats from 12,000' in order to do the curve-around, but still I almost ended up in the canyon. The suck was enormous. Gliders that didn't curve around like I did and tried to do the crossing from further back were in even worse trouble. A couple of gliders landed up in the mountains at this point, either because of canyon suck, or too much wind to glide out, or whatever. Some were able to relaunch (although their flight for the day was ended as far as scoring goes since they had technically landed), and some stayed up there for retrieve. Apparently one person landed up high (~9000'), called for retrieve as there was a "road" nearby, gave his co-ordinates, but didn't mention his elevation. So the van that was sent for him ended up going up this serious 4 wheel-drive-only road, bottoming out, for 10 km, instead of going along a paved road they had assumed he was next to in the valley floor :)

I managed to get across American Fork canyon and on the other side it was working too, but it was getting windier and nastier. It was harder to get high now since the wind was trashing the thermals up, and we had another huge bowl to get to the other side of and over before we could tag the TP. I dicked around in this bowl forever, trying to get high to cross to the other side, and did indeed get to the other side finally. But once over there, finally at 12,500', it was extreme leesidedness. We still had to get over Lone Peak, which is about 11,000' high, and it was not gonna happen. From 12,500' we all hit sustained 8m/s down, with gliders all around me wadding up and falling out of the sky, and were flushed back into the valley we had just struggled out of (in the opposite direction we were trying to go). All that effort we had just expended down the toilet!

A few pilots were able to sneak across to the other side, but closer to POTM, and ended up landing at the north side of POTM as there was no lift on the windward side by now. It was so windy from the north that even the people who were 10 minutes ahead of us and at the TP, weren't finding lift on the way to goal (down/crosswind), and landing short. In the end about 22 pilots made goal, most of them people who had arrived at Lone Peak about 10 minutes before my group, when the wind was still more west and less north (which made for less leeside and thus a bit easier to penetrate).

Meanwhile those of us back in the lee of Lone Peak were being flushed to the ground. Fortunately at the base of Lone Peak is the town of Alpine, with lots of fields, schools, churches, etc. to land in. Pilots were raining out of the sky all arou 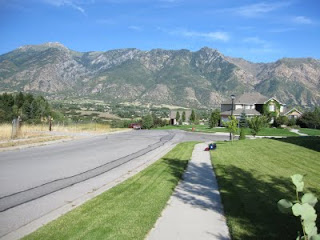 nd me. I found a field to land in, next to an intersection (International Way and Meadowlark Drive in Alpine, Utah, if you want to find it on Google Maps :), and on my final glide I saw that the actual T-intersection just short of my chosen field was wide enough to land in, was deserted (no car traffic), and had no obstacles like powerlines or trees. And the field I was about to land in was full of line-grabbing sagebrush which I envisioned taking hours to extricate my glider from. So at the last minute I opted to land in the intersection instead (had traffic all of a sudden appeared I would have just gone long and landed in the sagefield instead) and had a nice touchdown just past the stop sign. Tracklog is here.

This meant I got to pack up on a nice green mowed lawn next to the sidewalk, rather than a messy sage field with grasshoppers, and talk to the people who lived nearby who were out mowing their laws, BBQ'ing, walking their dogs, etc. Landing in SLC is much more civilized than landing out in, say Golden or Pemberton! Retrieval driver Marge was in the area so she picked me up and I took over as co-pilot, as she was a bit overwhelmed with driving, answering the radio, taking phone calls and GPS co-ordinates from downed pilots in Alpine (about 20 of us landed in the same vicinity), and using the Nuvi. We discovered that some of the subdivisions in Alpine were too new to actually be in the Nuvi GPS, so it took us a while to find those who were giving their co-ordinates as street intersections rather than GPS co-ordinates.

In the end we were able to round up everyone who had landed in the Alpine area, and back to the north side where we learned that 22 people had made goal. Others landed at goal, without tagging the TP first, since it was so windy that they couldn't continue upwind anyways. All in all a rather challenging day, and a bit dangerous in the lee of Lone Peak for those who got there a bit late. Not the best task for the day's conditions, but given the restriction on flying too far south, not much option. Hopefully the fire will be out soon so we can fly south more and north less :)