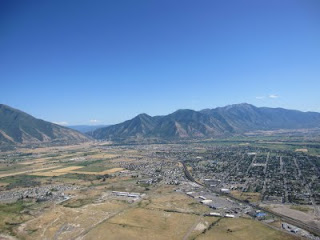 The first day of the Nationals and we arrived on launch early to get the logistics sorted out. Weather was sunny but windy in the valley, although not much wind at launch elevation (yet). It was predicted to be fairly windy at the top of lift (12,000' or so) but from the west, which is a good direction for most of the range.

The task was not super-long, only 50 km or so, but it was very technical. We had to launch and fly south to a TP, then fly back north to tag launch again, and then turn around and fly south for about 30 km to a goal field in the flats. All along the route were several canyons with the dreaded "canyon suck" (venturi).

When the window opened at 1pm it was looking very lame (the wind dummies weren't skying out like we hoped) and the race start wasn't actually until 2:30pm, so it wasn't a huge rush to get off launch. Good thing, as the cycles on both launches were few and far between. (There is a lower and upper launch, and I had hiked to the upper launch for the extra space, no lineups, and the extra 200' it gives you...launch is only 1800'/550m above the valley floor.)

Eventually a cycle came through that I liked and I got off launch, and headed for the gazebo for the house thermal that some people were getting up on. Others were bombing out to the bailout LZ (relaunches are allowed at this comp) in the hopes of getting a quick ride back up before the launch window closed at 3:30pm.

Conditions were quite rough in general. The thermals were strong but not organized and there was HUGE sink in between. Apparently this is common around here the day after a cold front passes through; day 2 is usually much nicer which augers well for tomorrow. And up high it was windy as predicted...at 12,000' it was maybe 20-25 knots and directly from the west, which meant that everyone who got that high and allowed themself to drift back with the thermal soon found themself on the back range with a long glide out. And by the time they made it back to the front range they were back to the same altitude as the people who stayed out front. In fact the best lift was out front over the valley floor.

I stayed out front and down lowish to avoid the higher winds aloft, and made my way to the first TP quite easily. Getting back to tag launch was another story. Strong canyon suck made the return trip very slow and tricky, and many pilots bombed out on this section. Reports of strong winds on the ground made me not want to join them, so I vowed to stay high and out of the valley flow, and if the thermal took me in the wrong direction from where I ultimately wanted to go, so be it.

Eventually I tagged launch and found a really nice climb which got me back to 11,000' and then it was the 30 km down/crosswind to goal. At this point you have two options. Some pilots opted to stay in the mountains the whole way, but this route was very circuitous as it took you away from goal, involved a huge into-wind push at the very end, and involved some big canyon crossings. It was also late enough in the day that people who took this route risked not making goal in time for the goal closing at 6:30pm.

I, and some other pilots, opted for the more direct route. Rather than flying the long way to goal, crossing some big canyons with big canyon suck, lots of west wind, and then having to punch directly into the wind to make the goal field, we opted to fly over the flats down/crosswind and hope to make goal that way. All day along the mountains, it had worked better out front vs. tight in, so we reasoned that the flats would be good too.

Several of us went on glide from our chosen jumping-off point and started the glide into the flats. It was soon clear that unless we found lift, we weren't going to make it as the wind was a bit too cross for a true downwind dash. I wasn't too upset though...the flying up until now had been very tough with wind to deal with, and I was fine with some quiet time with my glider.

3 of us made it to within 10 km of goal before we landed. I managed to get a ride in a goal-bound retrieve vehicle and drove the extra 5 minutes to goal :) In goal were about 12 pilots (Claudio landed just as I arrived), most of whom had chosen the longer route with the into-wind push at the very end (all comp gliders except for 1 serial class glider). So I guess the longer route was the way to go, although the last person just squeaked into goal with 10 minutes to spare before it closed. I don't think I would have made goal before the closing had I chosen the longer route. In the end I made around 40 km. Tracklog is here. Results (provisional so far) are here.

To top it all off, while climbing the fence out of the goal field (I had climbed in to help people pack up), I disturbed a hidden wasps nest in the vines covering part of the fence, and got several nice wasp stings from essentially grabbing their nest. Good thing I'm not allergic, and the swelling has now gone down :)

There was some carnage along the courseline too. One pilot side-hill landed/crashed on the way back from the 1st TP as he got enormous sink and wasn't going to make it to a LZ (there were powerlines in the way). Another pilot crashed up high and was heli-evacuated with a broken leg. It was definitely a day to keep an eye out...for many pilots this was their first flight here, and the post-frontal conditions made their maiden flight an exciting one.