Days of rest and remembrance 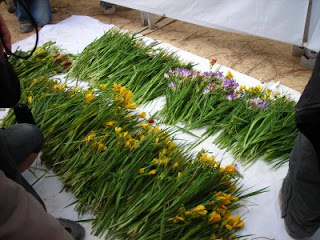 Yesterday was the mandated rest day, which I think just about everyone took advantage of. We were just toasted, with the daily several-hour flights under technical and challenging conditions, the sun, the long days, and most recently Stefan's death.

Some pilots went for butterfly tours or to the Toluca volcano; a bunch of us went to the Avandaro Golf Course. Juan Carlos (the launch director) is also the manager of that golf course, and got us free admission to the 4-star resort. So we spent the day lounging beside the pool, sleeping, or using the spa facilities. We stood out a bit there, as we showed up in our usual scruffy paragliding attire, compared to the immaculate waiters dressed like penguins offering us towels, menus, and bringing drinks directly to our spot by the pool.

After a few hours of that we hitched a ride back to Valle with a local farmer-type dude, some more food, and then the after-food coma. In fact I spent most the day in various states of semi-consciousness, catching up on sleep. It was certainly the most relaxing day I’ve had in Valle for a long time.

Yesterday evening I heard through the grapevine that today may not be a competition day, but rather a second “rest” day or something similar. This morning we got the word that it was going to be a free-flight day, no task, and we were welcome to head up the mountain and fly back to Valle and toss flowers in the Lake to commemorate Stefan.

Up on launch it was already working at 10am, cycles and the clouds were strong-looking and lenticulars up high. We had a minute of applause/ovation for Stefan (after the Mexican tradition of describing his life as a theatre performance, and he was now exiting the stage) while the media jostled the pilots to get close-ups and the best photos. It was very moving and lots of teary eyes in the crowd.

By 11am, after the meeting, it was definitely on the strong-looking side, and I decided not to launch but rather go back down, bring my flowers to the LZ, and do some more resting. Most other pilots decided to fly back to the lake, where the lakeshore was soon littered with flowers. Nice flights reported, with the strong stuff only for the first bit above launch, and then smooth sailing back to the lake, maybe only 2-3 climbs needed.

So I think we are back to the usual program starting tomorrow, and will have 5 remaining task days if the weather stays it’s usual sunny-and-flyable self. And after 2 days of rest, I think most of us will be ready for some more big XC.