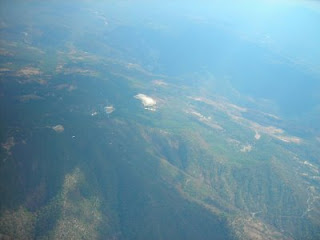 I attended the team leader meeting this morning for Brett, and heard that we actually had 7 mid-airs yesterday, 1 of which ended up in a reserve deployment. Yesterday had the most number of complaints by pilots about aggressive flying both in the start gaggle, and along the route.

Today was a much nicer start as there were lots of clouds around that you could boat around under and find your own spot and it was much smoother thermalling, and not have to be confined to the Crazy spot. The task today was 114 km, from launch to Santa Maria out on the flats, over the Mesa to Mesad, crosswind to Elefan behind town, back over the Mesa and over the flats to La Pila, back over the Mesa to Serro Gordo, and then the Lake LZ. With the big clouds this meant flying back and forth under possibly shady spots on the Mesa 3 times.

I launched early and was able to sniff something out and hang out between the Penon and launch. I watched as more pilots launched and went to the usual house thermal spot to the left of launch, but it wasn’t really working and more and more pilots just piled into that small space and stayed there. I was really glad I was under the clouds at that point, boating around over the Penon. Cloudbase was already 3500m and the whole Wall/Crazy cliffs were in shade, so once you got to cloudbase you wanted to stay there and use the cloud-suck. It was very cold though; glad I brought my extra fleece today!

Milled around until the 1pm start and did a photo shoot with Jim, flying wingtip to wingtip under the clouds, and then it was off over the flats to Santa Maria. Got the usual low save just before the TP, but was able to get back over the hills around the mine and follow an ever lower-group of pilots to 3 Kings.

At 3 Kings I saw a pilot find a thermal but then fall out of it in the winds; I was a bit higher so I had more altitude to get myself centered in it and up and away. Brett was below me and didn’t catch the climb, and had to ridge soar for about 30 minutes after I got out of there until he too could find something.

Meanwhile me and 2 other pilots were now under the clouds at Maguey, about 3700m, and went on glide for Mesad, which is past the convergence on the flats. Got there low, but was able to tag the TP and get back to cloudbase, thanks to one of the other pilots who was higher than me and showed the way. We drifted crosswind towards Elefan behind town, and at this point passed what I think was the 2nd gaggle on their way back from the TP (I think there was actually a faster gaggle which I probably missed entirely, while I was at Mesad).

The hills around Elefan where working so it wasn’t that difficult to tag this TP and get back out to the main valley at Saucos. As the next TP was back upwind, over the Mesa, and to the flats on the other side, about 30 km away, some pilots opted for the more direct route over the gas stations. I opted to head crosswind back to the convergence over Saucos, and try to get to the Mesa around La Casa or so, get up there, and punch back upwind from there.

Of course my plan didn’t work out, the convergence was a bit weaker by now (it was 4pm) and it was positioned more to the east than usual. I hit the usual into-wind death knell, and wasn’t able to penetrate to La Casa and the climb I suspected was there, landing at Jovan’s instead. Total distance 70 km, flying time 4:19 (with 1.5 hours of waiting for the start), tracklog here.

In goal was Yassen 1st, which is I think his second 1st place in a row. Jim was also in goal, and I suspect Keith was also but early enough to leave before Jim landed.

As I was landing I could hear over the radio about a pilot tossing his reserve behind the launch area and landing in a tree on the Mesa, not sure why. But I think people will be much happier with the flying conditions today vs. yesterday. However there is also a group of pilots who won’t be happy with today…the last pilots to get off launch weren’t able to get up and on course, since the whole mountain was shaded out by then, and they spent 2 hours+ bopping between launch and the Penon, while the rest of us were on course. I’m really glad I launched when I did; it was quite shady and light, but as I had the sky to myself I was able to work my way up to cloudbase bit by bit without having to battle the gaggle for space. And once under the clouds it was easy and all of a sudden lots of space.

I could have pushed a bit further into the lee of the Mesa but I didn’t really feel like it, and Jovan’s looked very inviting. I’ve discovered over the past days that I’m able to fly about 70 km of whatever task we are given, and at that point I either a) run out of effective sunlight, or b) hit the inevitable headwind, alone. With that in mind, if the task committee ever gives us a task of 75 km or less, I should be able to make goal!