A smaller chance of thunderstorms today, and there were some cells around. While we were climbing out on Mt 7 a cell developed to the SW and became quite ominous, and it started to rain out of it. Ahead of the cell it had shaded out the lower part of the mountain so those pilots caught low were stuck in the shade with approaching rain, so many bailed.

Those of us higher up were able to run back to lookout launch and wait out the cell there. I didn't feel there was much danger since the cell was tracking SE and with the NW wind, it would continue to track away from us.

Once the cell had fizzled we were away, about an hour later than we had hoped.  The going was tough as the lift was broken and it was a bit windy down low, but we managed to keep going, our group changing leaders every few thermals. 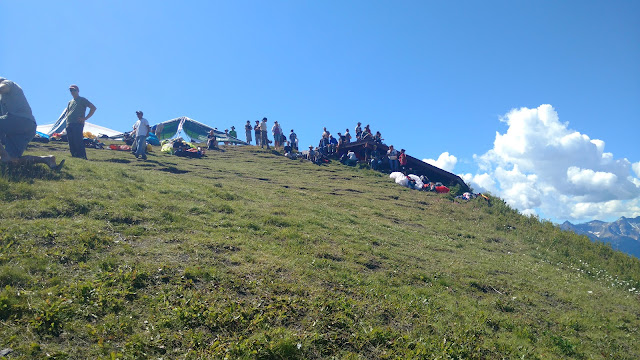 Onwards it was touch and go at Spur Valley, as I was unable to get high enough for the crossing for the Edgewater cliffs. Finally I decided to go anyways, trusting that I would be able to climb out on the NW flanks and avoid an inconvenient FSR landing with a hot walk out.

The others had caught a climb at Spur Valley and gotten ahead of me, and I could see some high cirrus coming at Radium. The shade was shutting things down, and those ahead of me were reporting having to possibly land due to it. I was able to continue to Windermere at 122 km while those ahead of me landed a few kms further or at Fairmont.

Despite the big clouds at the northern part of the flight it was beautiful and sunny the further south we went. Apparently another cell came through Golden after we had left but our course line was clear once we got past Parsons/Harrogate. It was unfortunate that one cell at the beginning shut so many down, in the end there was only a handful of us that got downrange.