Significant west winds aloft which means you have to launch early and get away before it blows out.  I inquired about launching off the west launch (where the tandems launch in the evenings) but was told probably not since things weren't "set up" over there. 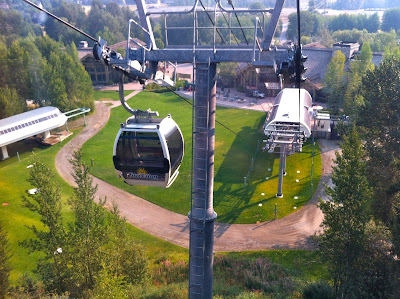 Task was to Challis via Mt. Borah, so basically a downwind run in the west wind.  I was a bit leery of the forecasted strong west winds but I was willing to at least consider the possibility of flying so I got my stuff ready.  As soon as pilots started launching it looked really sketchy...the wind was blowing over the back at the chairlift station with the occasional up-cycle in the lee down where we were, and gliders were going all over the place, both on launch and in the air.

I watched 2 SIV clinics within 2 minutes of each other.  First up was Denis on his Boom X who launched and proceeded to have multiple collapses and cascades right in front of launch, barely above the ground.  He wasn't yet in his pod so wasn't able to weightshift efficiently and it took a long time before he sorted it out.  Denis flies with a canopy-camera so it was all caught on video...hopefully Philippe will incorporate it into his videos and everyone can see what happened.  It was certainly exciting to watch from the safety of the ground.

Next up was an unknown pilot on a grey IP6.  I didn't see what caused it, but at the gasps and pointed fingers I looked over to watch him cascading until his tips went in and he was in some sort of stall situation.  Multiple riser twists and we saw him acquire even more, and soon we watched him facing the wrong way under his mostly-closed glider and going down.  His descent rate in this configuration was actually quite impressively slow, almost the same as coming down under a small reserve, and once he stabled out it looked like he was proceeding to kick his riser twists out.  But he was approaching the mountain and the chairlift lines and people started yelling, and over the radio, to throw his reserve.  But he refused to and ended up kicking himself out of the twists and getting his glider flying again just as he disappeared from view, and shortly swooped into view with barely enough altitude to clear the terrain.  He then proceeded to get jerked back up and was soon flying out to land, presumably with soiled underwear :)

At this point I wasn't very enthused about flying in these rotory conditions and a few seconds later the launch window was closed, and a minute later the task was cancelled.  Those in the air then reported very exciting landing conditions at the regular LZ, and soon it was advised not to land there but at the alternate school LZ, until that LZ was also declared unsafe to land at :)  Those of us packing up on launch had the pleasure of watching strong up-gusts come through with dust devils, followed by equally strong down-gusts.  Definitely not advisable to launch!

At this point most pilots have reported in and only a few have decided to keep flying.  With the strong west wind Jackson WY could be a possibility!  Given that if you want to go long from here, you need a strong W or SW wind, and launching early is mandatory so you can get away from the hill safely and be on your way before it becomes unlaunchable.  I also think on such days the alternate faces of Baldy Mountain should be considered...I realize they are not as groomed as the east launch, but it may be a feasible alternative to launching 120+ pilots off a launch that is destined to be in the lee if you wait too long.