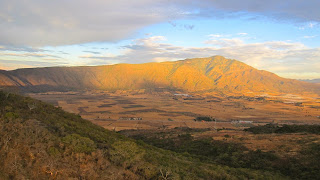 After getting myself settled in to my new digs at the hotel in Jocotepec, Jim, Derek, and I headed to the San Marcos launch.  Lots of scud clouds around and not much sun (apparently this is the worst it's been here since Derek and Jim showed up 2 months ago), but the birds were hanging in there so Derek went for a 30 minute flight before top-landing.  I was in the air shortly thereafter and managed to stay in the air for 30 minutes as well before sinking out to the Piano in the dried-up lakebed.  Not how I wanted my flight to go (short and sinking out!) but it was nice to clear the PG cobwebs and get some air under my feet again.

After a taco-fix it was back to launch for a late-day flight.  The skies were still the same (mostly cloudy) but the cycles were more consistent, and given that this is an afternoon site, we figured it would be easier to stay up this time around.  After initially planning to go solo, Derek and I went tandem instead (he's up to 17 tandems now) and it was super-smooth conditions.  Got above launch but not high enough to head over the back towards Jocotopec so this time we went to the San Marcos LZ.

Tomorrow we have a local pilot coming with a tandem so we'll have more people to fly with.  And hopefully the scuddy skies will clear up so we can go someplace XC tomorrow!