A slow start to the day, as there was lots of high cirrus cloud shutting things down.  So we didn't get to San Marcos until 1:30pm where we all promptly took a nap.  Priorities!

Jim launched at 2:40pm but it was still too light, and he sunk out after about 30 minutes.  But it was definitely on later when Derek and I launched just after 4pm and boomed up to 3000m right off launch.

Bypassed both gaps without bothering to turn and then tanked up to 3200m before heading over the back to Joco.  The highway intersection thermal was still there (so far, it's been very reliable) which gave me an extra 100m on the way over town, and I continued on the El Chante ridge.  Once again I had an awesome west tailwind, and was able to tank up to just over 3800m just where the ridge drops away.  With this kind of height I could see the runways of Guadalajara airport, and made sure to stay south of the ridge since we have figured that the GDL airspace probably starts just north of the ridge.

Derek had landed at the 5-star hotel and said he was gonna hang out, so Jim was chasing me and having a hard time keeping up with my groundspeed of 60kph...with all the random speedbumps on the roads here, it's kinda hard to maintain typical highway speeds while driving. 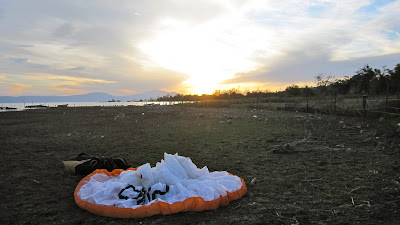 Once again I had about 30 minutes before sunset to make the most of my 3800m, and I was able to glide a few km's more than the last time, landing at the last available beach before the town of Mezcala.  Sent my SPOT co-ordinates to Jim and he arrived just as I was packing up, so we timed things pretty well and we were on the road by dark.  Other flying stories while I was flying can be found at FlyBC's Site of the Day.

The flight was pretty much a carbon copy of my previous flight except I omitted a short extra dogleg on the San Marcos ridge (which shortened my XC distance to just under 60km) and I was able to get higher near the end, enabling me to glide an extra few km's before sunset grounded me.  Even though it was essentially the same flight, it was still pretty cool as I've only done this route twice, and the sunset final glide of 20km is rather special.  It's amazing that you can launch at 4pm and still get a 60km flight!