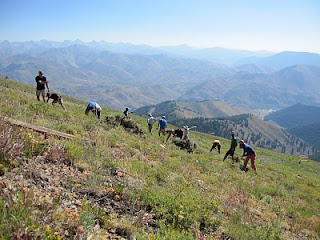 Too windy again today to fly, but a bunch of us went up to tidy up the launch area.  Usually it's a 2-3 glider launch in the cleared-off spot, but we widened it to about 8 gliders, with room for maybe 20 more if they are willing to lay out in the flowers and weeds.  So hopefully we won't have any launch lineup issues, and people will be able to lay out almost anywhere they want.

Later in the evening I went out to Sky Ridge; mostly to see if I could remember the way there, and also in case it laid down a bit wind-wise.  When I arrived at the LZ there were 5 speed gliders in the air, followed shortly afterward by a couple of comp gliders.  It looked strong at first and then appeared to mellow as the sun set.  I didn't go up though.  To the SW the sky was full of smoke from a nearby forest fire that started up last night.  Hopefully that smoke will keep it's distance!