Photos of recent flying in Nova Scotia are here and here.

Alex and I allocated a few days during our visit to Nova Scotia to go paragliding at Parrsboro, which is where I learned to fly in 1999.  Unlike most flying in BC, NS flying is almost exclusively coastal ridge soaring (although there is the odd inland thermal site), with most of the established flying sites in the Parrsboro area around the Bay of Fundy.

One of the unique qualities of flying here is the temporary nature of the beach LZ's.  With the world's highest tides, your LZ can disappear in a matter of hours or minutes, so most flying takes into account whether the tide is in or out.  So along with checking the marine forecast for wind conditions, you also have to consult the local tide tables.  On the flip side, at low tide you have oodles of extra LZ and in fact the flying can become even better, as the slope of the exposed beach can add significant height to your effective ridge, as well as the exposed sand contributing additional heat (provided it's sunny) for extra instability.  Sea thermals are common in November and December as the ocean temperature remains fairly constant while the air temperature plummets, creating a nice temperature gradient conducive to thermal production.

With numerous bays facing almost every wind direction, so long as there's wind, you can find a place to ridge soar.  Over the 3 days we were in the Parrsboro area, we flew 4 different sites with 4 different wind directions.

The fossil cliffs in Joggins are primarily a W-NW flying site, with both low and high cliffs to suit various wind strengths.  You can launch from an undeveloped property right on the smaller cliffs, or else from the fossil centre if you want to start higher.  When it's not flyable you can go exploring on the beach for fossils (they are continuously being exposed as the tides and storms erode the cliffs).  The views are pretty spectacular as you can see jagged red and grey cliffs along the shoreline and New Brunswick in the distance.

The main flying site in Parrsboro is Fox River, a SW site that faces the prevailing wind direction.  This is a section of low bluffs that is excellent for student training, practicing your top-landing techniques, swooping, or just relaxing in the air for hours.  The occasional cabin on the beach means you can wave at the locals as you fly overhead and they will always wave back...they love watching the PG's fly overhead!

Whenever the wind switches to SSW or pure S, then you have enormous stretches of coastline to play with.  Cape Chignecto has some spectacular flying on the 300' cliffs in the provincial park, but on the day that we briefly had SSW winds we chose a closer flying site near Ward's Brook.  Launch is out of the backyard of a property at around 100' (the locals don't mind, and in fact will come out to watch) and then you have oodles of cliffs to overfly.  If the winds are right you can go XC from here (ridge soaring the entire way) and try to fly to Spencer's Island...there are a couple of big gaps to cross though!

Pre-storm, you'll often get some form of east wind.  If it's E or SE, or even ENE, then you can go to West Bay (which actually faces east).  The views are spectacular if you get high as you can fly out to Cape Sharp and look over the back at the enormous volume of water churning on the other side as the tide goes in and out.  Don't get blown over the back...it's nothing but ocean behind you!  Further in the distance is Cape Blomidon and Cape Split (also flying sites) on the other side of the Bay of Fundy.

There is also a secondary SE flying site closer to Partridge Island...one of the local pilots has property and a cabin there, and included is a launch from the front yard!  A much smaller flying site than West Bay, but in some ways more interesting and technical due to the smaller terrain and the obstacles and gaps to traverse.  Looking out from bed one morning, we saw that it was blowing up in the front yard so Alex went flying...too light and just a sled ride, but it was rather neat to wake up and be flying a few minutes later!

We had perfect sunny weather and flyable windows every day, and the deciduous trees were in their full autumn glory...the reds and yellows practically glowed fluorescent against the blue skies, and were nicely contrasting with the occasional green conifer trees.  Usually the trees change colors a week or so sooner, but this year they were a bit late, so we were lucky to be there for the peak! 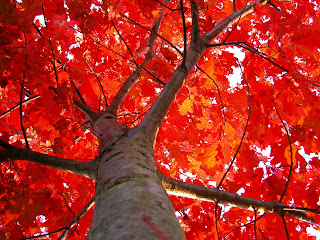 The flying sites near Parrsboro can be flown year-round, and different sites are on at different times of the year depending on the prevailing winds for the season.  In addition to the more established sites in Parrsboro, there are a couple of sites in Dartmouth (next door to Halifax) as well as potential sites near Digby and Yarmouth.  And of course Cape Breton has oodles of potential sites along the Cabot trail...there's simply not enough pilots in Nova Scotia to properly fly and document them all!

If you are interested in flying in Nova Scotia, get ahold of me or contact Michael Fuller.  He's the owner of Pegasus Paragliding which is the only PG school in the area, plus he's my former instructor!  Alternatively, give Brian Wheaton a shout (also listed on the PP website) as he's always keen to show pilots around.