Pics of the day can be found here. 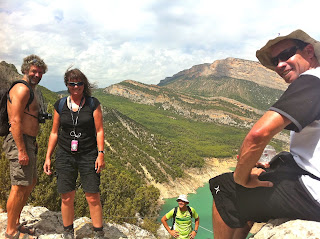 Up on launch it was pretty overcast with embedded cu's but also lots of virga, plus high winds predicted (30-40kph), so the day was cancelled.  A few pilots opted to fly down and it looked a bit sketchy as the winds kicked in early and they were flying into the rotor on their way to Camping.  The rest of us drove down :)

With the day cancelled and mostly overcast, it seemed like a perfect day to go for a hike and experience some rural Spain from the ground, rather than always flying over it.  Judith had done a long hike a few years ago around the Canyelles Pantana (the reservoir to the west) and suggested a shorter version of it (instead of a 6 hour out-and-return hike, we would get a PWC retrieve vehicle to pick us up on the other side, so it would instead be a 3-hour open distance hike).

We gathered a small crew together and started hiking.  The first 1/3 is a moderate uphill climb to the ridge, followed by a 2/3 slight downhill walk through the Mont Rebei gorge.  You actually start the hike in Catalunya but end up on the border with Aragon (both separate autonomous political communities in Spain), which is a much drier region. 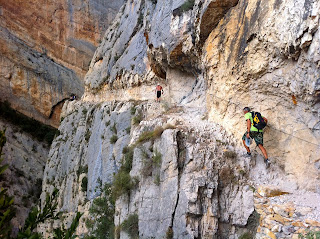 Beautiful and awesome scenery, as you start on the green side with the turquoise reservoir below you, transitioning along the sheer red and yellow cliffs (they have installed cables in spots to help you along, and there is apparently some rock climbing in the area), following through the venturi in the gorge, and coming out on the dry arid side.  It's not too strenuous a hike, provided you bring lots of water (there is a spring at the highest point so you can refill) and do it on a semi-overcast day.  Doing it on a bright sunny day would not be a good idea :)  At the other end there was a small interpretive hut with a temperature gauge which read a "mere" 34C, which is downright cool compared to the previous days.

A nice way to spend the afternoon and we got to see some pretty spectacular scenery from close up.  But we're here to fly, so hopefully the winds will do their thing today and tonight, so we can fly tomorrow.