For the first task of the Women's Open we decided (I'm on the task committee) to make an easy-to-accomplish task that would allow the newer comp pilots the chance to fly the ridge without having to jump any intimidating gorges, fly the flats a bit, and finally jump over the back for the goal field in Vilamitjana.  About 40km once you take away the TP cylinders.

Today we were flying without the live trackers we had last week (even though we were originally supposed to have them this week too), since the organization for the FAI Pre-Europeans commandeered them for their comp instead, so unfortunately you can't watch us all live (I'm flying with my SPOT live-tracking though).

For most of the course I was in second place behind Laurie on her 2-liner but after the Ager Camping turnpoint I returned to the ridge a bit low and had to thermal up before continuing, which cost me some time and allowed several pilots to get ahead of me.  Over the back was easy since it was basically a giant glide to goal with a short safety detour at the Castle (to prevent pilots from flying to goal via the gorge lake).  I think I was maybe 4th or 5th
(?) into goal. 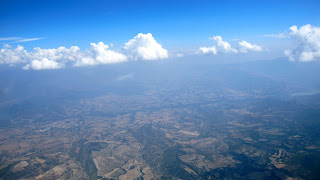 We'll see what the leading points do to the scores.

In the end there were about 13 pilots in goal (out of 32), many of whom it was their first time in goal, so there were lots of happy smiles today at the pool party!

Results (when they are published) will be found here.

Today was quite a fun day...I knew we were undercalling the task (it was an 80-100 km day) but it seemed more important to make the task easy for most of the pilots so as to have a very successful first day. Now that we've shown the pilots some of the main terrain features we hope to set some larger and more technical tasks.