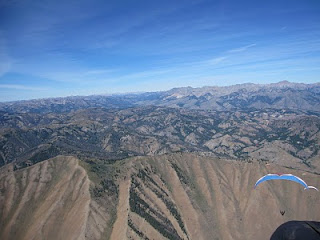 After 3 cancelled days, we were jonesing for a flight.  It was sunny and light winds aloft, but the lift wasn't forecasted to get very high, maybe 11,000' over the deep peaks, and more like 10,000' over the valley.

In the air that's exactly what I got...I couldn't get much above 10,000' over the launch area.  The task was 75km or so to Stanley (north), and getting there was gonna be tough with this ceiling.  I figured going deep would work better than staying over the valley as I would potentially get higher, but when the start came, most people went for the over-the-valley route.  I saw a few people heading deep, and followed them rather than staying with the huge gaggle.  But I wasn't able to stay high enough during the glide to get to the next deep peak with any comfortable altitude, so I chickened out and headed back for the valley.

Big mistake, as by then all the valley-folks had passed on and I was pretty much by myself.  Usually this doesn't bother me as I'm used to flying alone, but given that today was rather scratchy, I should have stayed with a group (any group), rather than chase off deep and then change my mind part-way.  Anyways, long story short, I wasn't able to get up once I started off, and eventually sidehill landed in Adam's Gulch next to a hiking trail, barely out of minimum distance.

I wasn't the only one to land early; some landed deeper than me in canyons and such.  I only had to walk about 30 minutes before getting to the parking lot at the trailhead, where a retrieve vehicle was waiting for us.

So in the end I had a really crappy day and made a mistake, which pretty much kills my chances of doing well at this comp.  I haven't bombed so badly at a task in years, so I'm kinda bummed about it.  But the good thing is, I really have no place to go but up :)

I have no idea who did what or who made goal.  But you'll be able to find the results here eventually.