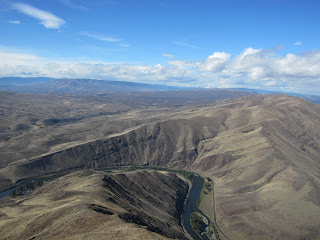 I attended the Baldy fly-in last year and had a great time, so dragged Alex along this year :)  And I have a new paraglider I've been itching to fly so wanted to take advantage of the dry side of the mountains to get some quality time with my new toy.

We had about 60-70 pilots attend (mostly Seattle pilots), including about 15 Canucks.  Saturday morning at breakfast we "pied" Jim Orava with whipped cream as the video camera rolled...always fun with the Pemberton crew!

Saturday was hot hot hot!  Rather stable so it was work to stay up at times.  I flew 3 times; my second flight was over 1 hour and I only flew out to land as it was getting funky in the air.  One pilot landed on the wrong side of the river and had to get a boat-ride across the Yakima river to the LZ.

Saturday night was the famous potluck dinner and bonfire; this year we had the added bonus of about 30 African drums to play with.  With all the booming it was a good thing that stretch of the canyon is pretty much deserted and the only house is a couple of miles away (the owner of Baldy mountain and LZ).  Turns out most of the prizes (spot landing and duration contests) were won by Canuck pilots; gift certificates from REI and glider stuff sacks made by a local Seattle pilot. 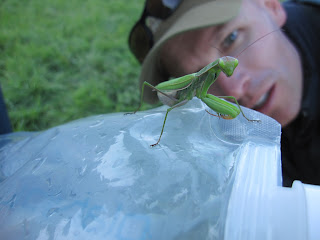 Sunday morning it was back up to launch for some more flying.  Grey skies turned blue with big cu's and the temperature soared.  One pilot had a rattlesnake attempt to get a free flight by crawling inside her glider cells; we had to shoo it out (carefully!) and scare it away from the launch area.  Similar conditions to Saturday initially, but local pilots suspected it would blow out eventually.  It did, and those of us in the air opted to land around 3pm while those still on launch had to drive down.  Eventually even the HG's stood down!

People started leaving but we stuck around to help clean up the area.  A swim in the river to wash off the dust and then driving west into the clouds.  As predicted, as soon as we hit the Snoqualmie summit it started raining, the temperature dropped, and we said goodbye to the sun and desert.

I had a really good time; the flying was good (not XC-able as it was too stable, but still nice to fly) and the party was really fun!  I was just so happy to be flying someplace hot and dry and get away from the coastal rains.

A big thanks to both Bob Bunger and Dave Norwood, local pilots who did the lion's share of the organizing and did a bunch of driving to make sure the visiting pilots got to fly.  They did a fantastic job and deserve big kudos!   You can see some more pics of the fly-in here.