Well after several days of machine- and hand-work, we finally got to fly the new launch! Initially we thought it would only be 3-4 people, but in the end we gathered up about 10 pilots to head up, do some more work on the launch, and fly off when we were finished.

Cloudbase was right at launch (1080m ASL) when we arrived about 2pm so it was no rush to get in the air, so we worked on shoring up the ditch behind launch, creating a bridge over the creek and swimming hole, spreading grass seed, and generally cleaning up the still-muddy launch and surrounding area.

Then the clouds started to part so we convinced Al that it was his privilege to launch first from the new-and-improved launch; a couple of tarps on the fresh spots (until the grass grows in), and he was off!

As the clouds continued to lift we were concerned about the strong SW winds that were supposed to be manifesting in the Fraser Valley; however we also thought the Sylvester Valley would hide the wind a bit. After watching Al we decided it was OK to fly, and we'd try to fly north to Dewdney Mountain where we had parked all the cars. In the end it was Al, Rob, Robin, Alex, and myself that flew, while Derek, Martina, Jim, and a couple of FlyBC students opted to drive down.

In the air it was quite rough due to all the spines that stick out along the range. But if you stayed high it was much nicer and less windy. But despite that it was still a bit spicy in the lee of the spines so you had to be on your toes. Cloudbase was abnormally low for this area...only 1200m or so. Usually it's way higher! 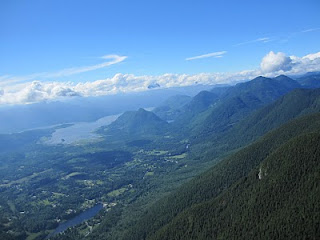 Once at Dewdney it was both ridge soarable and thermic, and we had a nice field picked out next to the cars. But it was so nice we decided to stay in the air a lot longer, playing in and around the clouds, flying out to Hatzic Lake, and generally enjoying the view. We didn't land until after 7pm, and it was still thermic and flyable even then (and probably until 8pm). Tracklog is here.

So the new launch has had its first customers, and they were very happy with the results. Big Kudos to Al for getting this project finally off the ground; he really deserves a big round of applause for all the personal work he's put into this place and helping to develop a new viable site. We envision this site being suitable as an alternative to Woodside and Bridal on stable and/or windy days, especially in the height of summer when the FV cloubases are low, while the Sylvester Valley cloudbases are almost always higher. The road is still in rough shape, but Tamahi Logging is scheduled to fix the lower 2/3's in order to get their logging trucks up and down, so in the end we could end up with a Woodside-quality road for at least the bottom 2/3's.