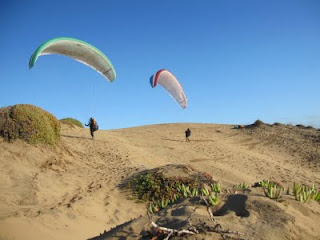 We didn't get up to launch until mid-afternoon as the winds were still light; we started at Sand City and it was too light, so we moved operations to Lakecourt.

It was still light but doable, and straight in which made the light winds OK. No signs of locals, even at the HG ramp up north, so we had the whole place to ourselves. Alex flew south to Sand City and back, kiting some sections, while Robin stuck closer to home just south of Lakecourt. I went north a bit and played at a section of dunes I'm quite fond of...a low sand cliff that people will write their notes in ("Bob wuz here", etc.) with a long sloping dune behind it to waga around in.

I played in this section for a while, doing my swoops and getting low enough to read all the notes that people had written in the sides of the cliff (which is only about 10' high). Whenever I got low I'd tank up on the dune behind me, and head back out for some more swoopage.

Back at Lakecourt and I landed to do some filming of Robin and Alex, who were back in the launch zone as the winds were lightening up. BTW, the "table" sand formation in the bowl south of Lakecourt launch (people who have been here before will know what I'm talking about) is now gone...it looks like somebody undermined it so it's now eroding to a barely recognizable stump, sans iceplants so it'll probably be totally gone by next year). It was getting late and the winds were switching more SW (they had been pretty much straight on W until now) so it was harder to stay up on the low stuff.

Robin and I opted to pack up next to the car, while Alex would try to fly back to Fort Ord, where we would pick him up (you can now drive into Fort Ord, which makes it a handy half-way spot to get picked up if you land out between Lakecourt and Sand City). Alex ended up landing on the beach beneath Fort Ord and hiked up where we found him later on.

All in all 2-3 hours of flyable winds, and we ended up with 3/4 days of flying (the missing day it was drizzling, so we went to Big Sur for a hike instead.). We are now on our way north, stopping at Hat Creek Rim, near Mount Shasta, and then onwards to Chelan for the Women's fly-in.