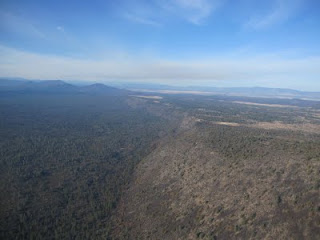 After leaving Marina super-early, we arrived at Hat Creek Rim mid-afternoon. The site is very easy to find; using the online site guides and GPS co-ordinates we were able to find the LZ's and also the road up. Road up is an easy 2 wheel drive and you arrive to the main launch at around 4500' (the main LZ is about 3500'). It faces mostly west which makes it an afternoon site, and in fact the main attraction is the daily evening glassoff.

After watching the conditions for a while we figured it was OK to fly. Given that we had driven the car up to launch, and we weren't sure about the top-landing, we had to figure out who was going to have to drive down. Initialy we drew straws and I drew the short straw, but Robin decided he didn't want to fly, so I was able to.

I elected to be the test pilot and got myself ready. When doing the radio check an unfamiliar voice came on the radio and asked if we were pilots! Turns out it was the only local in the area, Page, and the local radio frequency is the same as the Fraser Valley frequency! He told us he would be up in 5 minutes but I was already launching, so by the time he arrived on launch I was over launch and at about 6000'. 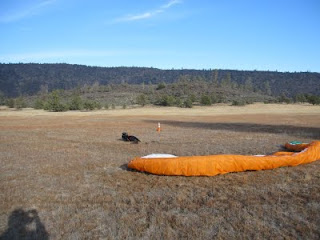 Winds aloft were north but not too bad, but it was definitely a bit over the back. Initially it was smooth, but as the flight went on it got rougher and rougher, so I opted to head to the main LZ and play around there, before landing in the target bullseye after about 30-45 minutes of flying.

Meanwhile Alex and Robin were geting ready to launch; Page had offered to drive retrieve for us so all 3 of us would be allowed to fly. Cycles were getting light (it was almost 5pm) and they had to wait for some cycles, but got in the air and were soon at the altitudes I had been at previous. Apparently the conditions were a bit different for them vs. me; it was rougher and the winds were coming from all sorts of directions. They flew for about 45 minutes before coming out to join me in the LZ. 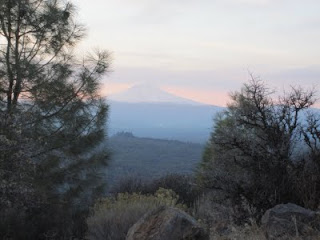 Hat Creek Rim is a beautiful place to fly; you have Mt. Shasta to the NW and Mt. Lassen to the SW, and you are in a secluded valley away from the main valley winds (in Redding it was strong north winds, while at Hat Creek it was very light). It's completely unregulated; just read the info on the online site guides and make sure to clean up your litter. Free camping in the LZ (or on launch for that matter) and you have the place all to yourself. Page said most people who fly are visitors, and they come for the glassoff, although mid-day XC is possible. But in the middle of the summer, he doesn't recommend flying mid-day as it will be too strong and unpleasant. But this time of year, mid-day flying is fine.