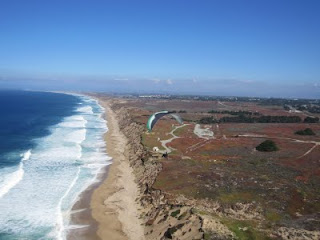 Today was sunny skies and NW winds, so we got ourselves to the Sand City launch around noon and met up with a visiting pilot, Andre, from the Czech Republic. It was almost on, but by the time we got our stuff ready, it was fully on and threatening to blow out.

Launched and it was so on and almost straight in that we decided to do the run to the HG ramp at the Marina Beach State Park (about 10 km one way). Alex and I opted to stay down low, while Robin stayed high. Initially Alex and I were staying local while doing some filming, but eventually we started making tracks north.

With the strong winds you had to be careful, if staying low, not to get sucked into a gap and the associated venturi, and most of the gaps I crossed just fine. But I misjudged on one, and had to land in the iceplants. Hiked down to the beach and kited my way back up the dune and continued flying north; Robin and Alex were now ahead of me while I had sorted myself out.

Robin reported, at Lakecourt, that he saw a couple "fully involved" as he flew overhead. One of the dangers of flying at Marina is what you see from the air! Nude sunbathing, sex, homeless people with makeshift camps, dead sea lions, we see it all.

Once north of Lakecourt the the dunes are smaller for a bit, and involved on my part some kiting past some low sections (on one of my landings, I kited my way past a sea lion who was rather unconcerned with my presence). The winds had backed off a bit so this wasn’t a problem, and I got myself to the ramp to find the HG pilots just setting up. I had brought my lunch so figured it was time to eat!

We could see a roll-cloud-type (in appearance only, not in actuality) coming in, and the locals said it would cause the winds to die off, which is what happened. As the roll-shaped cloud came overhead another one started to form offshore (see picture #2 behind Alex), and it was clear a wave effect was setting up, and the time to relaunch and get ourselves back to the car at Sand City was in between waves, when the winds were actually reaching the ground and not bouncing over us. 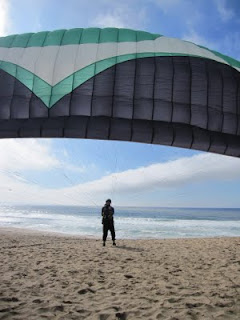 Alex went first and kited/flew back to Sand City. I was a bit behind and made it as far as Fort Ord before landing, and Robin stopped at Lakecourt to play with another pilot who was in the area there. On the beach it was nice and sunny and warm, and I relaxed while watching the surf (sunny California!) until I figured it was time to walk out to the road and catch up with Alex who was getting the car (Alex says for me to put in here, that he saved our bacon).

In the end we flew pretty much all afternoon, and it was still on at the end of the day (it got stronger again, but I had packed up by then and was nicely ensconced on the beach, watching the sea lions playing in the surf). NW winds and warm temps all day (Robin opted to fly barefoot and in shorts, it was so nice!) made it a perfect day. We hope for more tomorrow!