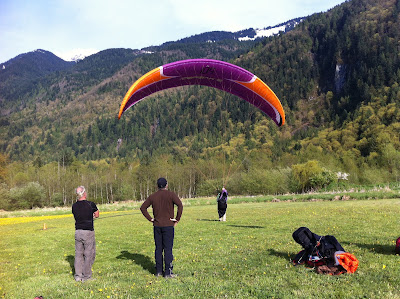 Today almost felt like summer...warm, blue, and windy...more typical of July or August vs. late April.  Alan, Ihor, and Martin N were already in the air when we arrived on launch and reported some wind but really nice lift, so we soon joined them.  Definitely wind, about 20kph, but up high it was fine and smooth, abundant lift everywhere.

Elk was working it's magic yet again and with 1600-1800m altitudes it was easy to fly out towards Ryder Lake and back.  Too windy to try top-landing Upper Bridal (and besides, there's still oodles of snow up there...you could land and sink in up to your knees or hips!) and too windy for heading to the Butterfly, so Kevin and I went only as far as Cheam and played around on the shoulder trying to get high.  I think Al got to 2000m around there.

Lots of wind in the valley but it was smooth and easy landings, at which point we commenced kiting each other's gliders.  Jim had showed up on an errand as it was blown out at Woodside and we basically enjoyed the sun and warmth while playing with gear.  A rather short flight (only a couple of hours) but nice to enjoy the sun and wearing t-shirts in the LZ!