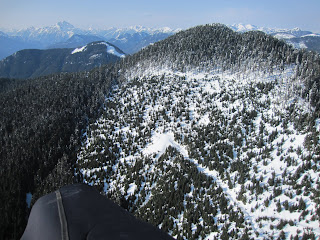 Got out to Woodside late on Good Friday since Alex had to work, so missed the early window and the chance to fly with Al on his bigger triangle.  But launched at 3:30pm and still managed to get a 52km FAI triangle by flying to Dewdney and pushing out to the gas station, then up to just past Mt. St. Benedict, and then back to the Fraser Valley.  Up to this point it was easy to stay high and we were tag-teaming the route, but once back in the Fraser Valley it was shutting down and it was the giant death glide in the shade to see if we could close it.  Not quite close enough to get back to the peninsula, and we landed at the base of Harrison knob where Rob S. picked us up (thanks Rob!).

Given that it was the Easter meet weekend in Savona, and I've never really flown Savona (OK, once, but it was 10 years ago, 1 flight off the dump, and I don't remember much about it), we decided to head up-country to try the XC possibilities up there.  I knew we'd probably be missing another good day in the Fraser Valley, but I figured, we can fly the Fraser Valley anytime, but Savona is a bit harder to predict and there's gonna be a bunch of people there already, so let's go. 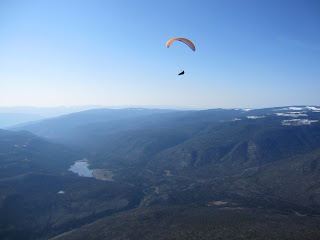 Saturday was a really good day in Savona (and Friday was too): Alex and I flew to Cache Creek and back to Deadmans, for a 50km out and return.  We had John McClintock with us for part of the flight and a few other HG's went XC too.  But we didn't actually take off until later in the day due to it blowing too much east earlier and it was over the back (but not strong enough to justify going to an east-facing ridge site).  So had we been able to get going earlier we'd have gone farther, but it was a nice introduction to the area. 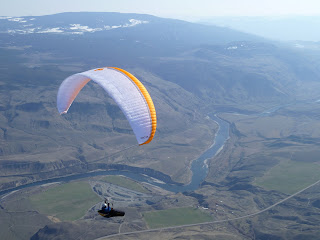 Big party at the Pub Saturday night (it was John's birthday) which meant Sunday was pretty quiet as most pilots were nursing hangovers.  Alex and I had just done 2 days of significant XC so we were both pretty mellow and stayed local, getting high over launch but not straying too far.  It was actually pretty nice to just fly around without a set goal in mind, and just turn the XC brain off for once :)

Back on the road back to Vancouver we watched the rain approach and then it was back to the wet coast for another week of rain.  But Savona was sunny and dry (and hot in the LZ...it felt like summer!), and apparently this was one of the few Easter Meets where it was flyable all 3 days.  In the end I was glad to have gone to Savona to try someplace different, fly with a different crowd, and get away from the FV flying for a bit.