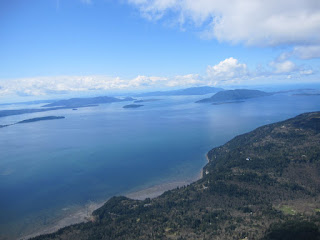 The weather was looking good for the weekend at Blanchard, and it was a fly-in (the first there in a long time) so Alex and I braved the border crossing and arrived at the LZ before noon.  Others from away had showed up too...Dave Norwood and Jeff from the dry side of the mountains (Baldy and Chelan pilots) had driven over, and some other Canucks (Ivan, Gary H., Wiley, and Karen) had driven down too.

It was quite cloudy at first and on launch it was light south winds.  But birds were soaring to the south so a few of us launched and were able to stay up in the light thermals.  Eventually the winds picked up and swung around more to the west, and it became easier to stay up (and a larger lift band too).  As it got stronger and more west more pilots launched, until at one point there were over 40 gliders in the air.  KomoTV was out and was filming, the parking lot was full of sightseers and their cars, and both launches were filled with set-up hang gliders and bunched-up paragliders.  No top-landing today!

It got quite busy on the west side, and there was a mid-air on the south side.  Both pilots were unhurt and flew away, with one glider the worse for wear with a couple of torn cells and broken lines.  A large storm cell was brewing to the east and the wind was picking up a bit, so I went out to land (I had flown for almost 2.5 hours by now and my hands were getting cold...I hadn't busted out my chemical heat-warmers) and managed to keep the glider dry (the field is quite wet...you want to land as close to, and pack up on, the driveway).  About 15 minutes after I landed it got quite gusty and strong from the NW, and lots of late-landing PG pilots got dragged through the water and mud as they came in going backwards etc.  Quite entertaining to watch :)

With the rest of the day blown out and too north, it was time to party!  Basecamp was at Jeff and Stacey Beck's house on the way up to launch, and they had a sweet setup.  Lots of space to set up tents, tables, a pig roasting, a bonfire set up (the wood was arranged in a statue of a PG pilot), and zipline.  The PG pilot bonfire was lit (to the cheers of the crowd), the food was served, and pilots warmed around the campfire late into the night.

Next morning was breakfast time (served by Jeff and Stacey) and then time to figure out what to do.  The winds were NW and we feared it was gonna stay that way, so initially Alex and I were gonna head to the Fraser Valley.  Some pilots headed home towards Tiger Mtn, while most others stayed at Blanchard.

Good thing we stayed at Blanchard!  The NW winds died off enough to get off launch, it was more sweet than yesterday!  Bluer skies and higher cloudbase, and it was XC time!  Alex headed east to Lookout Mtn, (east of highway #5) and back to Blanchard, while I opted to fly SE towards Concrete (I had read a report of a pilot flying to Concrete from Blanchard last week and wanted to duplicate the feat).

Cloudbase was 1700m in spots and it was strong NW winds aloft, and a nice cloudstreet to Sedro-Woolley at the mouth of the (I think it's called) Skagit Valley.  Arrived at the NW side and I had the tailwind (55+kph) and altitude to make it to Concrete, but I suspected it would be very windy there as the valley narrows into a mountain pass (a local later on confirmed this and said Concrete gets windy easily and often).  So I opted to turn around and fly back to Sedro-Woolley, where I landed on the outskirts of town where Alex picked me up.  A nice 33km flight, and a new place to explore on XC!

Turns out Steve Forslund had followed me and landed in the same area, so we went to pick him up too.  Meanwhile back at Blanchard it was still on, and ridge-soarable plus thermic, and pilots were having a epic time.

Photos of the weekend are here.

We had an excellent 2 days in Blanchard.  That place is a good option when it's otherwise skunky inland, especially this time of year when it's calling for 40-60% POP in the Fraser Valley.  Just remember to factor in the border wait if you are crossing via Vancouver!