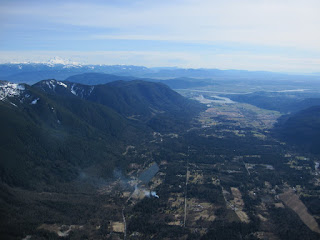 I didn't plan to hike up Mt. St. Benedict.  When we met at the Husky gas station in Dewdney, it was blowing hard from the east about 20-30kph and clearly not flyable in the Fraser Valley.  Al seemed to think that the outflow wouldn't reach Benedict and it would flyable there.  But due to the snow level it would be a 2.5km hike through deep snow, and I wasn't keen for that, especially as I didn't bring snowshoes.  So I figured I would drive the truck down after getting as high as we could.

But on the way up the truck was swerving a bit in the wet snow and I wasn't sure I *wanted* to drive it down at that point, so I was pretty much committed to hiking up!  Going up was pretty slow for me as I was breaking through the snow every so often (up to my hips) while the rest were snowshoeing up.

As I got to the last ridge at the powerline valley I could hear the north wind howling through the gap, but it was blowing up at launch, and the smoke in the valley below was showing light inflow (see photos).  Rob and Al got to launch first, and Rob turned around to bring me Al's snowshoes at the 2/3's point (thanks Rob, it was a big help!), so I was able to pick up the pace and make it to launch after 2:20 of hiking (they did it in 1:30).

Al had just launched and appeared to sink out, but we later on saw him scunging around at 600m or so towards Dewdney.  Jim was next, and then it was Matt's turn.  We had tramped down a runway so we wouldn't punch through during our launch runs, but Matt went through anyways and almost aborted, kicking a tree as he swung through the pendulum and flying away.

I went next, and was soon in the air and climbing.  The air was ratty and leeside up to about 1200m, and then it smoothed out as the mountains fell away.  Smooth up to 1600m, and then bouncy again up to 1700m.  As I flew south the wind direction was almost directly due south up high,  but got more east as I flew towards the Fraser Valley.  There was very little north wind up high.  At Dewdney it was very east and I was actually flying up the Norrish Creek side of things, and it still looked windy in the Fraser Valley so I turned around to land someplace in the Sylvester Valley where it would probably be nicer conditions.  I was still high so crossed the valley to the Mission side, lots of lift over there, and eventually landed at the Durieu School LZ with Rob S, after 2:13 in the air.

Al had landed in Mission, and Matt had done an out-and-return from Dewdney and back to the Dike LZ.  Jim landed just north of Allan Lake.  All had great flights and lots of grins in the Durieu LZ where we all met up.

I talked with Kevin Ault who was at Elk, and later heard that he flew to Cultus Lake after getting to 2000m over Elk.  So it was a good day, so long as you weren't in the Fraser Valley!

If you are going to hike Benedict, bring snowshoes!  There is tonnes of snow still and will take a long time to melt.  There is another obstacle at the bottom of the road up...another burned out car.  You have to drive in the bushes to get around it, as they parked it directly in the middle of the road before torching it.