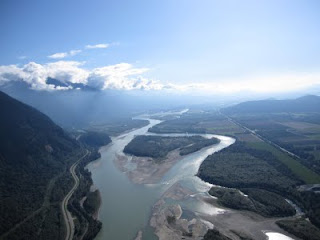 Well today was looking like another good XC day at Woodside...unstable and cu's forming all over the place. This time I arrived earlier than a few days ago, and was up on launch by 1:45pm. But of course I got to talking with people and didn't actually launch until closer to 2:30pm. Kevin was waiting at cloudbase for me (which wasn't that high; about 1100m) and once we joined up we went over the back towards Agassiz Mountain.

I arrived at Agassiz Mountain lower than the last day; this time 680m, but I wasn't too concerned with the rocks baking in the sun and facing SW. Sure enough I got up there and then Daryl Sawatsky and Thomm McEchryn joined us so we were now 4.

Once again we weren't getting super-high at Agassiz, 1100m or so, and Thomm had left much lower than that, so he opted to land at Harrison Hot Springs beach. Kevin and I made it to the cliffs on Bear Mountain (XC tip: when crossing from Agassiz to Bear, head for the grey cliffs, NOT the red/brown ones!) and then waited for Daryl to join us.

At this point we were trying to figure out the best way to cross to the Bridal side of the valley. We weren't getting very high and I like more altitude when doing the crossing. Eventually, after dicking around on Bear for a bit, I finally got to 1300m and decided this was good to cross to Hicks with enough altitude to find something over there and not just grovel around, and do the crossing from there rather than from Bear.

(I didn't think we had enough altitude to do the crossing from Bear, which is a slightly longer crossing than from Hicks. The downside to doing it from Hicks, is even though it's less of a crossing, you have to do more cross-wind flying and possibly end up too far downwind to get up successfully on the Ludwig side. From Bear, if you're high enough, you can incorporate some downwind-ness and arrive a bit more upwind.)

On Hicks it was lame so when I got up to 1050m, I went for the crossing. I usually like at least 1200m, and prefer 1400m for a "comfortable" arrival on Ludwig, but I figured those kinds of heights weren't in the cards for today, and especially at Hicks. Arrived just east of Ludwig at 400m and groveled around for a bit, but it was quite windy down that low and nothing was quite connecting, so I ended up landing at the large grassy LZ at the Peter's Road exit on highway #1. Tracklog is here.

Daryl joined me 5 minutes later and we radioed to Kevin and Al (who had joined Kevin while I was doing the crossing), that it was a bit dubious to do the crossing from Hicks and from that low, so they opted to stay on the #7 side of the Fraser river and continue towards Hope. They never got high again, and ended up landing in Ruby Creek.

Rob Samplonius came by Hicks a few minutes later and we told him the same story, and he also opted to land at Ruby Creek.

Meanwhile Matt J. had not connected on Bear and landed in the swamp between the south side of Bear and Green hill. What normally would be a 10 minute walk out on dry land turned into an hour-long slog through waist-deep water before he got to a road and retrieve. When I saw him last he was in what looked like a spare pare of flight suit pants :) and barefoot.

Daryl and I now had the job of getting back to Woodside from the wrong side of the Fraser river. Using a tip I learned, I told Daryl to keep his helmet visible. I did the same and kept my radio harness on. The whole idea is to try to appear as "non-hobo" as possible, and no that's not our wordly possesions on our backs!, and appear interesting enough to entice a car to stop.

About 1 minute after putting our thumbs and helmets out, a car stopped. It was a shitty beat-up K-car, but with a pimped-out stereo system (with huge-ass speakers in the back windows). Driving the car was "Tiger". When asked what he does for a living, Tiger replied that he "gambles and smokes pot". He travels the world doing poker tournaments (last year he won $100,000 he said), and when he runs out of money, comes back to Vancouver to work enough to start another world tour. While in Vancouver he smokes pot. He illustrated this point by, when dropping us off at the #9 overpass at Bridal, opening up his glove compartment and offering (trying to sell?) us a bag of weed. In the glove compartment was bags and bags of the stuff; the entire glove compartment was full of bags of pot. We declined :) and as we hiked off to our next hitch-hiking spot, we saw him rolling a big fatty to tide him over as he continued to Vancouver.

Next up was a ride to the A&W in Agassiz courtesy of a couple of giggling girls, and then we hiked to the Vancouver side of the outskirts of Agassiz (just out of sight of the RCMP office :) for our final ride to Woodside. The guy was originally headed to Harrison Hot Springs, but after learning we were paraglider pilots, he wanted to find out more. We told him that if he gave us a ride to our cars, we could get him a business card for one of the local paragliding schools and set him up. So we were able to get a ride right back to our cars :)

Meanwhile the folks who had landed at Ruby Creek were slowly making their way back to their cars, and Matt J. was still making his way out of the swamp. Al was able to pick him up and also Rob and Nicolai; Kevin had gotten his own ride back to his car. So everyone was accounted for by the end of the day, with lots of smiling faces as another XC day came to a close.