Rich Hass from NWP had invited the Canadians to attend the annual Baldy Butte fly-in, and as the weather was looking rather stable for the coast, I decided to check it out.

Looking at the weather ahead of time, I saw that Friday would be good with light and variable winds, Saturday would be blown out, and Sunday would be a good Saddle day. Leaving Vancouver about 5am I was able to get to the Baldy LZ on Friday morning to get the site briefing and sign the waivers (the launch is on private property).

Two locals are David Norwood and Bob Bunger, who live in Yakima. They were out setting up shop for the fly-in, and eventually there were about 10 of us heading up. 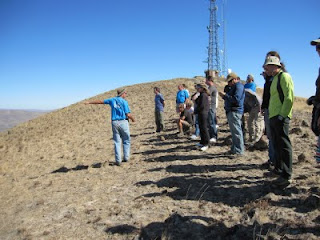 Baldy Butte has multiple launches for pretty much every wind direction (it is bald, after all), and the typical launch direction is S or SW. But on Friday it was more west (or at least the house thermal was causing the local cycles to manifest as west), so the south launch was rather cross (much like launching at Bridal...you have to be ready for your glider to possibly turn 90 degrees as you bring it up). I opted to head for the west launch (you hike down about 2 minutes to a grassy spot) and soon was in the air.

Nice thermals and it was hot, so it was pleasant in the air. There was a forest fire to the north, just outside Ellensburg, so the smoke was spreading out to the east and marking the inversion. To the east I could see into the Yakima Firing Range, and watched as the military guys shot off several missiles into the air and shot them down (it looked like miniature space shuttle launches going on, with the gout of flame on the ground followed by a plume of smoke as the missile shot into the air). This is a very good area to avoid flying over! In fact there is a lot of complicated airspace in that direction, and Dave was kind enough to show me the XC routes in that direction and where to fly to stay out of the airspace (for future reference!).

While watching the show in the firing range I was able to get to 5000' which is not quite enough for XC (you want 6000' at least, and preferably 7000'), but Meredyth and Dave Wheeler were heading out to see what would happen so I joined them.

The usual XC route in SW winds is to the NE, heading over the back to the north of the firing range (avoiding all the airspace). But with the low altitudes we were getting we weren't going to be going that way, so we decided 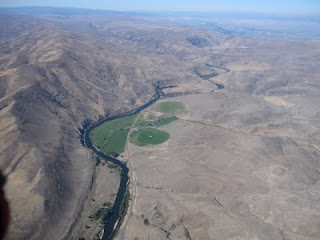 to head north along the canyon road towards Ellensburg. We only went about 7 km or so before landing, as further than that you run out of LZ's until you reach the end of the canyon, and we weren't high enough for that glide. I landed next to Dave and met up with Meredyth who had gotten a ride and back to the LZ.

Those who elected to stick close to the Butte were able to stay up for several hours until it shut down at dusk. Then those who were staying for the fly-in set up camp in the temporary LZ (the usual LZ is across the road, but for the fly-in, we're allowed to camp and land next to the river). A beautiful LZ with green grass, right next to the Yakima river, with nice shade trees and right next to one of the numerous pull-outs the fly fishers use to get in and out of the river.

As predicted, the next day was blown out, so no flying locally. I kited a couple of speed gliders (Bullet 12 and XT-16) but that was about it, and most everyone went into town to get food etc for the big party that night. Later in the afternoon we were fooled into thinking the winds had backed off (at least they had in the LZ) so we all trooped up to launch, and in fact it was windier than earlier in the day! Back down to the LZ and it was party time, and the beer flowed and the campfire was roaring, and it was all good. I was among the last to leave the campfire and people were snoring away all around.

Next morning it was east winds at Baldy, and predicted to manifest as north at Saddle, so a bunch of us went up Baldy for a morning flight. Up on launch it was strong east winds about 25 kph and nobody was willing to launch except Robin and I. We both waited for a lull and launched no problems, and were soon ridge soaring the east side.

Initially it was purely ridge lift, and I was able to skim the slope just like at Marina or Sand City, except the terrain was big rocks and bushes instead of nice soft sand. Not a place to touch down when wagga'ing around! The ridge is kinda small, so Robin and I were using pretty much all of it, and had somebody else launched I would have given up my spot to let somebody else have it. But nobody else did launch, and eventually the thermals kicked in and we got high over the towers and there was all of a sudden tonnes of room for lots of people. But it was even windier on launch, and nobody else could get off, so we had the whole place to ourselves.

After about 1 hour I told Robin I was heading out as it seemed to be getting windier, and we both headed out for a nice landing in light winds in the LZ. Then it was off to Saddle Mountain!

Arriving on Saddle about 1pm it was already on, with several PG's in the air already, and about 30 more setting up. A couple of HG's joined in the fun too! Initially it was strong on launch and we were having to hold gliders down while waiting fo 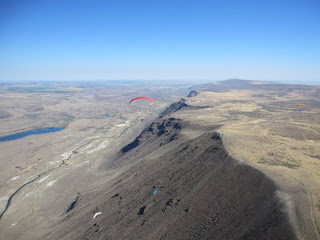 r lulls, but eventually it died off and was almost pure thermal lift at this point and not ridgy.

We had a super-fun time flying in the ridge lift and then the thermal lift, although I found myself flown out early in the day and opted to top-land and enjoy the midday sun (maybe the last really warm day of the year). Robin and Norm stayed up for much longer; Norm eventually bottom-landed as he had errands to do in Vernon, and Robin stayed up until the very end, top-landing to join me at the end of the day.

In the end we had something like 10 Canucks show up for flying at Baldy and Saddle Mountain. Super-fun on Sunday, and a nice short XC on Friday to round out the weekend. Baldy has really good XC potential, and the Seattle locals fly it all the time in the spring. If you are thinking of doing some XC next spring and the Fraser Valley is getting boring, think about Baldy. It's only about 4-4.5 hours away and is almost always sunny (a good weekend road-trip destination), and every XC-able day there are people flying it. Dave Norwood and Bob Bunger live nearby and are always willing to do site orientations and XC tips.

Pictures of the weekend can be found here.

Here's a short video Dave Norwood shot of the flying this weekend!