Yesterday we were on launch for most of the day waiting for the conditions to improve enough for a task, but it stayed too windy and too south to be safely taskable, so the day was cancelled.  About half of the field chose to ride down, and half of the field chose to free-fly.  As I was with the film crew we chose to fly and get some additional footage, and the conditions away from the mountain were butter-smooth and big easy climbs to 2800m and a nice landing at the Miller Beer Farm, but it was windy close to the mountain and had we had a task, I'm sure there would have been tree-carnage due to some pilots' propensity to tree-surf in an attempt to stay in the game. 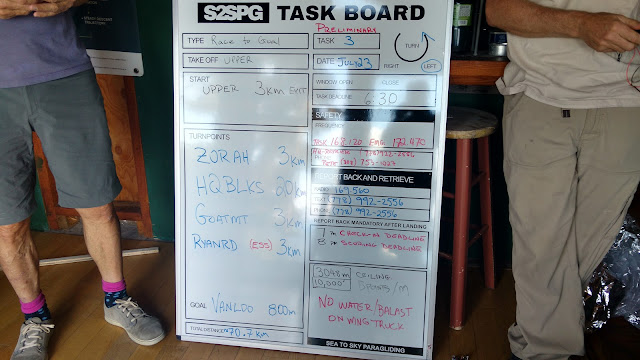 Today was lighter winds and the forecast was for it to shade over somewhat in the afternoon as a front was predicted to move in, so we set a task to take pilots past the Hurley Pass and to Zorah Peak so they could see some spectacular scenery, and then to a large TP near Barbour, with a final TP at Goat and then to the VanLoon's goal field at the base of the Hurley Pass road.  Once again the start gaggle was well-behaved with oodles of lift, lots of clouds, and no crowding or competing for start-altitude.  It was fast and furious to Goat Mountain, where pilot tanked up for the crossing to Zorah and the clouds were popping all over the place, the clouds were starting to get a bit big as the frontal system approached!

I got a bit low on the way back from Zorah and had to scratch around Pauline for 10 minutes or so, before getting high enough to surf the ridge all the way to Barbour, where I went from too low to too high quite quickly as the clouds over Barbour were growing quickly.  Tagging the TP I was on full bar with big ears, trying to stay below 3000m and the airspace penalties (mission accomplished!).  Other pilots around me were doing the same and it was full bar in smooth lift all the way to Goat, where it was a 180 degree turn into the valley and continuing pulley-to-pulley to the ESS.  Pilots were coming in way too high due to the late-day cloud suck and it was about an extra 30 minutes for me to actually land at the goal field.  And it was raining paragliders all over the place!  In the end we had something like 80 pilots in goal, and lots of personal bests from many pilots! 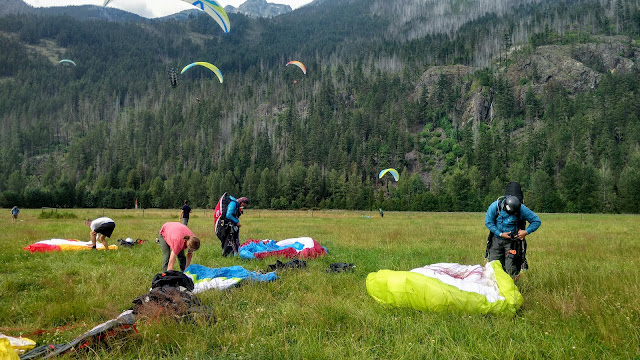 We did have 2 more reserve deployments, one from the same pilot as the day before, and they were rescued via helicopter again (after most pilots had landed in goal already, so no need to stop the task), and one more from a pilot near the goal field.  We watched him drift onto the mountain about 600m up and was able to be rescued with little drama by Hawaii Pete and Thomas Sloss since there was a road and trail very near him.  Neither pilot was injured and both were back at HQ by nightfall.  There was an additional pilot who got off course line (??) and ended up near Birkenhead Peak (nowhere near the course line we had set), he was also OK.

My tracklog from today.