My first XC flights of the season! 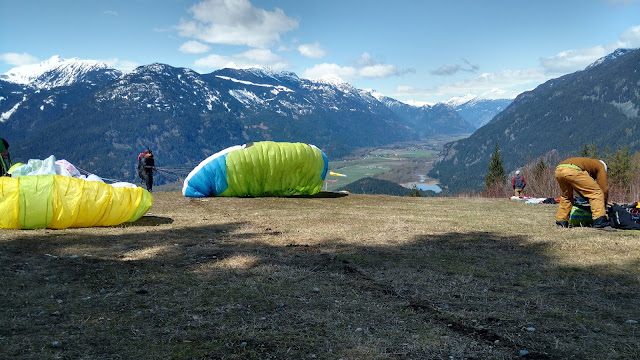 I think this may be the earliest that I've flown Pemberton in a season, usually it's May before we start up there.  There is still snow on the road up and it's a 15 minute walk in, although yesterday a truck did make it in past the snowdrifts and to launch, so I expect more trucks to start making the drive in anytime now!  I believe the shuttle service starts back up in mid-May when Guy and Ricardo get back from their vacation.

Conditions were a bit north, but the winds were generally light, and it was very easy to get to cloud base over upper launch (which is still fully snowed-in, although pilots have been top-landing in the knee-deep snow).  Once at cloud base around 2600m it was super-cruisy all the way to Owl Peak and the gap, then once again at Barbour/Copper it was on!

There was practically no wind at Hurley Pass which made the crossing very enjoyable (no wind to suck you into the Pass!) and all the to North Creek and Spindrift the west wind was barely noticeable.  Usually coming around the corner at Spindrift it's a bit of a washing machine, but this time nada so we were able to pretty much straight-line it.  However it was looking more and more blue the further west you went and the closer to the glacier you got, so we didn't bother going to Athelstan but turned around at the 50km mark.

Heading back was pretty much no turning needed all the way to Hurley, we were getting to 3000m and there was no wind!  Pilots were complaining about the cold but I was bundled in 5 layers of clothes and puffy everything, chemical heat warmers on my hands, and I was toasty warm.  Back at launch we were still getting to 2600m so Alex and I went off across the valley towards Currie, while Peter went across to Signal Hill and up the Rutherford a bit.

Over at Currie there was practically no wind so it was thermal only, no dynamic soaring on the NW faces.  It was amazing that there was basically zero wind all over, even up high there was only a smidge of north.  Lots of happy faces in the LZ as most pilots had an awesome day (except for the cold)!

The following day was much more stable as predicted, much less lift and harder to get away from launch.  I managed to get to 1700m at Upper launch and scunged along in the slight east wind along the ridge to Owl, then crossed quite low, and spent a bit of time scratching my way back up under Copper.  This allowed Stefan to catch up to me and we worked our way to Hurley Pass where I got my max of 2400m and decided to turn back, while Stefan continued on to Sampson before turning around too.

A bunch of pilots had finally gotten high enough to follow and were on their way to the Pass when I passed them going back to launch, and they were getting better lift, so the day was finally turning on after a slow start.  But back at launch it was hard to get over 2000m, and I wasn't feeling confident about going over to Lil'wat peak with those low altitudes, so I decided on an early landing so I could enjoy the 22C and sun in the LZ.  Pilots had top-landed at Upper launch and it was apparently quite sloppy snow and still deep in spots, so they were landing at the LZ with wet feet and legs!