After an almost 5-month flying hiatus (winter!) it was time to test out my new BGD Lynx and get everything ready for a new flying season!  I suspected it wasn't going to be a great flying day but I was OK with that as I was feeling a bit rusty and didn't want to jump in too quickly.

It was quite overcast at Woodside but there was some thermic activity, but not much.  Kevin and I spent a few minutes scratching below launch in *very* light lift (barely above zeros!) before losing it and landing in Riverside.  A short flight, but enough to get the feel for the new glider and ascertain that I still knew how to fly :) 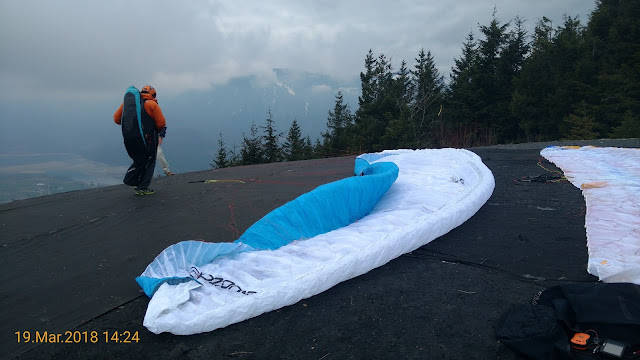 Compared to the Cure, the Lynx is very similar but feels a bit more "refined" in general.  The speedbar is much lighter and is the biggest change IMO, very easy to use and little effort required to hold it, very nice for long transitions I'm anticipating!  The launch characteristics are also a bit easier (the Cure was already quite good at this, but the Lynx is even lighter mass so it's super-easy to pull up).  I do find the Lynx a bit more turny vs. the Cure (maybe because there's less mass to move around?) so I will have to adjust my flying a bit so I don't inadvertently put it into a dive if I'm turning aggressively in strong lift!