The forecasts were looking quite good for Mt. St. Benedict so a big group (14 or so) of pilots headed up to fly!

The road to the new cutblocks has been buffed right up and it's now 2-wheel driveable (high clearance, although 4-wheel drive would be better) to these cutblocks.  Two of them show promise as a lower Mt. St. Benedict launch, which would allow us to fly there sooner in the season (when the upper launch is still snowed-in) and also save on wear-n-tear on trucks driving up.  Some work needs to be done, but when we were there at noon it was already on and it's an easy glide to the Virtue LZ. 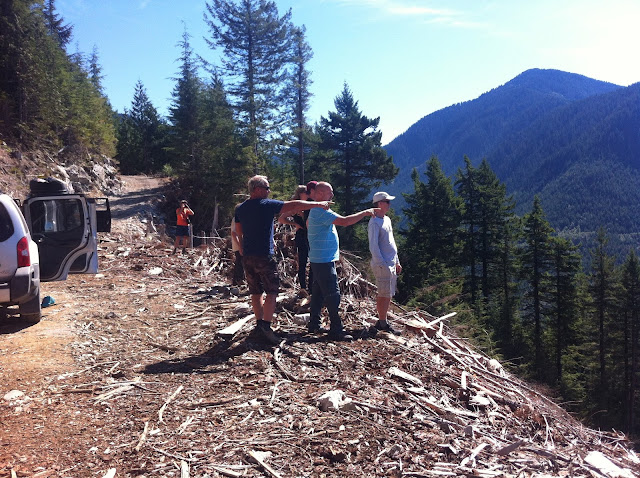 Once past the new cutblocks the road is rougher with cross-ditches, but easily driveable all the way to the upper launch.  New black carpet also covers launch to keep the bushes and twig out of your glider, and it's also possible for hang gliders to launch now (Pedro brought his HG up).

We could see smoke from the US forest fires coming up from the south into the Fraser Valley, but we were still in the clear.  We heard reports from Bridal that Woodside looked smoked in, although other reports said Woodside was just fine in the smoke.

There was plenty of lift and busting airspace was once again an issue as the climbs were going well beyond 1981m.  Andrew, Peter, and Al went to Blinch Lake and back, while Gary flew to Dewdney and back.  I had an airport pickup later that evening so I didn't want to land out and have a long retrieve (which normally wouldn't be too bad due to the loads of quads etc that were cruising the backroads this weekend) so I stuck to the main valley.

The smoke was coming down the valley and shading things out at the Dewdney end so I crossed the valley to the Mission side to play around over there.  Not much lift (I actually wasn't expecting any, given the lack of clouds) but I was able to stay up for a bit and eventually landed at the school while most others landed at the Virtue LZ.

I think that was the biggest crowd of pilots we've ever had at Benedict, and possible the first hang glider flight off the upper launch (??).  Up until now the last part was hike-in only, but now that the road is opened up for all 4-wheel drive vehicles we may see some more flying there!